Work Backward
Symbols can show movement of points on a coordinate plane.

Do you UNDERSTAND?
Question 2.
How can you check the starting position in the answer from the example at the top?
Answer:

Question 3.
Write a Problem Write a problem involving movement of points on a coordinate plane that can be solved by working backward.
Answer:

Question 8.
Heather is thinking of a solid that is made up of a couple of shapes. The solid has 5 faces. One of the faces is a shape that has sides of equal length. The other 4 faces are shapes that have three sides. What is the name of the solid Heather is thinking of?
Answer:

Question 9.
Steve, Derrin, Sid, Spencer, and Naji are waiting in line to buy tickets to a movie. Derrin is in front of Spencer and behind Sid. Steve is between Sid and Derrin. Naji is behind Spencer. Who is first in line?
Answer:

Question 11.
Philip wants to take the quickest trip to Chicago. Some trains make more stops than others. Which train should he take? 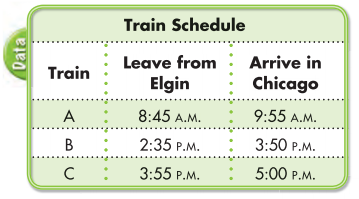